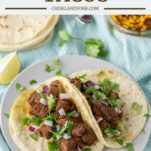 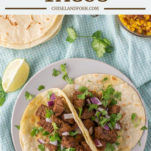 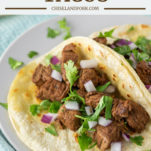 These quick and tasty carne asada street tacos are simple to make, but packed with flavor. They are the definition of street tacos as they're served on corn tortillas and topped with just a few ingredients like cilantro, onion and lime juice.

I'm all about tacos. I have them about 3-4 times a month - just at home. From crispy tofu tacos to slow cooker chicken tacos to spicy shrimp tacos.

We also venture out to get tacos as well. Recently a taco joint called Taco Bravo opened about 1 minute from our house so we had to try it.

My favorite taco we ordered was a Mexican street taco with steak. I remember when we finished, I told my wife I hadn't made a version of my own so I was going to have to get working on that.

And today's Mexican street tacos are the result. There isn't much work to these steak tacos, but you wouldn't know it as the flavor is outstanding.

One thing unique about these carne asada tacos is I cut the steak before cooking, just so I can get it browned on more sides. It also allows the marinade to really get into the steak. So if you love steak tacos, I suggest giving these a try.

Add olive oil to large skillet over medium-high heat. Add the steak and cook until it has browned and the marinade has reduced, about 5-6 minutes. Serve steak in tortillas with some toppings.

What Does Carne Asada Mean?

Carne asada literally means beef that has been marinated and grilled.

What is Flank Steak?

Flank steak comes from the cow's belly muscles. It’s a flavorful piece of meat, but is very lean and contains almost no fat. Because of this it can be tough, but it can be a tasty and tender if you learn how to prepare it properly.

Marinating flank steak and cooking over high heat are important. It is super important when slicing the steak that you cut against the grain. You can see step-by-step instructions at The Kitchn.

Skirt steak can be substituted for flank steak with these nachos. It has more fat than flank steak, resulting in richer-flavored meat that’s also ideal for grilling, tacos, fajitas, and stir-fries.

Like flank steak, it must be sliced against the grain in order to be tender.

Do I Have to Let the Steak Marinate?

No. You can toss in everything and use immediately. I personally like to have it marinate for about a hour as it helps tenderize the meat.

What Makes it a Street Taco?

A street taco is typically served on a soft corn tortilla with grilled or pan-fried chicken, beef or pork. The toppings are usually minimal like cilantro, onion and radishes.

An American-style taco is usually serve in a crunchy tortilla and has a wider variety of toppings.

How Long Will It Last?

Leftovers will last in an airtight container for 3-4 days in the fridge or 3 months in a freezer.

If you’ve tried these carne asada street tacos or any other recipe on Chisel & Fork, please let me know how it turned out in the comments below! You can also follow me on Facebook, Instagram, Pinterest and YouTube to see more tasty meals and anything else I'm up to. 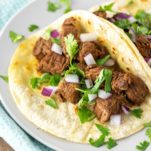