You Are Here: Home → Chicken 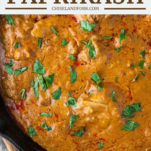 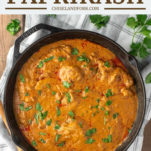 This easy chicken paprikash recipe is a traditional Hungarian dish with chicken cooked in a sauce loaded with paprika and sour cream.

I'm a big fan of one pot skillet meals - from chicken saltimobocca to pork medallions with blue cheese sauce. For some reason they just scream comfort food to me. Plus it doesn't hurt that you only have to clean up one dish.

But have you ever had chicken paprikash? If you haven't, then you area really missing out. For those that haven't even heard of it, it is the Hungarian National Dish. Well maybe not, but paprika is super popular in Hungary! Basically this dish is chicken loaded with paprika.

I easily remember the first time I ever had it. There was a small little restaurant in Longwood that my dad and mom both really enjoyed, called Chef Henry's. It specialized in Eastern European which meant everything on the menu was foreign to me when I was a kid.

Oh and for some background, I was super picky as a kid. So my mom suggested the only thing that she thought I'd be willing to eat and enjoy - chicken paprikash. I will admit I was skeptical but after one bite all was forgiven.

Over the next couple of years, I actually requested that we go to Chef Henry's just so I could get that orange colored chicken as I called it. Sadly Chef Henry's eventually closed, and for a while it was just one of those dishes I had forgotten about. But a couple of years ago, I was looking for something different during a cold night and a chicken paprikash recipe popped in my head!

After doing a ton of research and trial and error on a few occasions, I created the perfect chicken paprikash recipe that reminds me of my childhood visits to Chef Henry's.

As with any recipe, you can mix up the ingredients. Some variations include:

Mix together the flour with paprika, salt and pepper and dredge the chicken in it. Save the leftover flour and cook the chicken in a large skillet over medium-high heat with some oil for about 6 minutes total. Remove and set aside.

Add ½ cup of the liquid and ½ sour cream to the leftover flour and mix until smooth. Add the mixture to the the pot and simmer for 5 minutes before stirring in remaining sour cream. Taste for seasoning.

There are three types of paprika you will see at the grocery store:

What Type of Paprika Should I Use?

It really is all about preference. I can't take a ton of heat so I normally just do paprika or a combination of paprika and a little hot paprika.

But if you like your dishes on the hot side, go with Hungarian paprika. It leads to what you would call an authentic paprikash.

What Type of Chicken Should I Use?

A traditional chicken paprikash recipe uses bone-in chicken thighs, but at the end of the day you can use whatever cut of chicken you like.

What if I Don't Have Sour Cream?

While sour cream the traditional ingredient, you can replace it with Greek yogurt.

When is the Chicken Done?

You know the chicken is cooked when it reaches 165°F with an instant-read thermometer or if you cut into the chicken and the juices run clear and there is no pink.

Honestly, I always just cut the chicken to see when it is done. If it isn’t just cook slightly longer.

The perfect complement to this chicken paprikash recipe is German spaetzle or cheddar pierogies. You can also go with a starch like mashed potatoes.

For vegetables, roasted Brussels sprouts or broccoli is never a bad choice.

If you’ve tried this chicken paprikash recipe or any other recipe on Chisel & Fork, please let me know how it turned out in the comments below! You can also follow me on Facebook, Instagram, Pinterest and YouTube to see more tasty meals and anything else I'm up to. 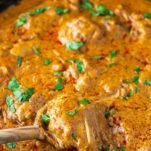