With fresh, homemade chorizo that is charred until crisp, this chorizo tacos recipe will make you think you are at a taco taqueria.

I could have tacos every night - from carne asada street tacos to sweet potato tacos to spicy shrimp tacos.

But if you go to a local taqueria, I guarantee they will have some chorizo tacos. While I have had plenty over time, I never had made some myself until today.

If you've never had chorizo, it is pork sausage loaded with spices and vinegar. In Spain, it is usually smoked, while in Mexico it is made with fresh pork. And these tacos are inspired by the Mexican version.

These are traditional street tacos, made with the fresh chorizo on corn tortillas and topped with some minimal toppings like onion, cilantro, radishes and lime juice. The only bad thing about them is it hard to stop at one or two or three. Enjoy!

Like any recipe, you can mix up the ingredients. Some variations include:

Mix the pork in a large bowl with the garlic, spices and vinegar until combined. Then heat a large skillet over medium-high heat with some oil and cook the chorizo, breaking up with a spoon. Cook for 10-12 minutes so you get a nice char. Then serve with your favorite toppings.

What is the Difference Between Mexican and Spanish Chorizo?

Mexican chorizo is usually seasoned with chile peppers and vinegar and made with fresh pork. Spanish chorizo is made with garlic and paprika and usually smoked.

Can I Make the Chorizo Spicier?

Yes. We don't love a ton of spice but if you want them spicer, use hot paprika. You can also add a touch of cayenne pepper.

What Makes it a Street Taco?

A street taco is typically served on a soft corn tortilla with grilled or pan-fried chicken, beef or pork. The toppings are usually minimal like cilantro, onion and radishes.

An American-style taco is usually serve in a crunchy tortilla and has a wider variety of toppings.

What Tortillas Should I Use?

Although chorizo tacos are traditionally served on corn tortillas, you can use flour tortillas if you prefer.

But if you really want to step your game up, try some homemade blue corn tortillas.

If you’ve tried these chorizo tacos or any other recipe on Chisel & Fork, please let me know how it turned out in the comments below! You can also follow me on Facebook, Instagram, Pinterest and YouTube to see more tasty meals and anything else I'm up to. 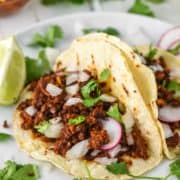