You Are Here: Home → Side Dishes 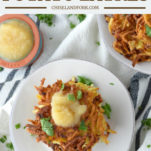 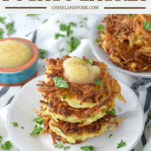 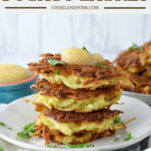 This classic potato latkes recipe is shallow-fried pancakes of grated potatoes and onion, making it the perfect side dish for a variety of meals. They're great on their own as well if you love potatoes.

Potato latkes are often associated with Hanukkah these days, but actually originally originated in the eastern European countries of Austria, Germany, Poland and Russia as a peasant food.

As potatoes were cheap and plentiful while also easy to store, these became a stable of families across the area. Luckily their popularity has carried over here as there really isn't much better than a crispy potato latkes recipe.

When scouring the internet for a potato latkes recipe, you'll see a variety of latkes but there is usually one ingredient that separates them. Either matzo meal or flour are used to help bind the pancakes.

As I don't really use matzo meal for anything else and always have flour on hand, this potato latkes recipe uses flour. But be my guest and use matzo meal if you prefer. If you want it gluten-free, you could actually use cornstarch.

So if you feel like some good old eastern European comfort food, this potato latkes recipe could be the perfect side to compliment to some bratwurst, stuffed cabbage rolls or even chicken schnitzel. (Hint, hint...) Hope you enjoy!

In general, russet potatoes are best for a potato latkes recipe. If you follow this blog at all, you know I love sweet potatoes.

You can easily replace russet potatoes with sweet potatoes or if you're really feeling creative, you can use butternut squash instead. The ratios stay the same, but the flavor will be different.

I'll let you decide which you like best. However if you are sticking with traditional latkes, I'd stay with russet potatoes as opposed to something like Yukon Golds as they have a higher starch content which means they are less likely to fall apart and yield a crispy consistency.

What is Traditionally Served with Latkes?

Potato latkes are usually served with some sour cream and applesauce on the side.

If you want your latkes to remain crispy, place the latkes on a baking sheet at and bake at 375°F for 10 minutes.

Other Side Dish Recipes

If you’ve tried this potato latkes recipe or any other recipe on Chisel & Fork, please let me know how it turned out in the comments below! You can also follow me on Facebook, Instagram, Pinterest and YouTube to see more tasty meals and anything else I'm up to. 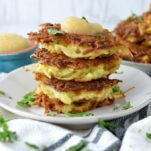