You Are Here: Vegetarian

These vegetarian quinoa stuffed peppers are hearty and filling and the perfect vegetarian option for any day you feel liking being healthy. It doesn't hurt that they are super tasty as well.

It's January, which is all about eating healthy, which means lots of Mexican-inspired vegetarian meals like crispy tofu tacos or vegetarian burrito bowls.

In fact, Food and Wine comes out with a great healthy eating calendar every year! I mean we've got to lose some of those pounds we added during the holidays, or at least I do.

Unfortunately for me, I battle eating healthy sometimes as I just want to eat what I enjoy. But luckily these vegetarian stuffed bell peppers are not only healthy, but taste great too!

My wife and I are all about southwest flavors, but most times we're eating meals loaded with not necessarily the healthiest ingredients so this is a nice change of pace for us.

What makes these quinoa stuffed peppers great, is you can change the flavors around a little just with the spices you use. You could even use some salsa, instead of diced green chiles.

I know for us, we can't handle too much heat, but if you need more heat just add some cayenne pepper. So if you are like us and need to be on the healthier side these days, then give these quinoa stuffed peppers a try.

You can mix up the ingredients if you want. Some variations include:

Cook the quinoa according to package instructions then combine the quinoa with the rest of the ingredients and 1 cup of cheese.

Slice tops of the peppers and scoop out the inside. Spoon the filling to the top of each. Add the peppers in a baking dish with some water. Cover with aluminum and bake at 375°F for 50 minutes. Add cheese on top and broil for 2-3 minutes or until melted.

Can I Make this Vegan?

Yes you can. There are plenty of vegan cheese options out there that will work with these stuffed peppers. If you're feeling really ambitious, you can make your own vegan pepper jack cheese. Check out Baked-In's post on how she made it.

Does It Matter Which Way I Cut the Peppers?

No. I like to cut the tops off personally, but you can also just slice down the middle in half and lay the peppers on its sides.

Yes you can either cook the quinoa stuffed peppers and the freeze in a freezer safe dish for up to 3 months or stuff the peppers but don't cook and freeze them raw.

Either way you then just place in the oven and cook at 350°F. If they're already cooked, you cook until just warmed through and if they are raw, you'll want to cook for about 1 ½ hours.

Quinoa has become super popular and there is good reason for it. Some of the health benefits of quinoa include:

If you’ve tried these quinoa stuffed peppers or any other recipe on Chisel & Fork, please let me know how it turned out in the comments below! You can also follow me on Facebook, Instagram, Pinterest and YouTube to see more tasty meals and anything else I'm up to. 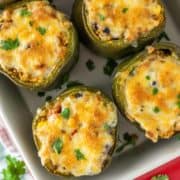