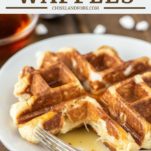 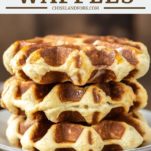 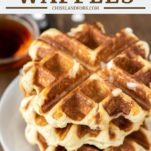 Made with dough instead of batter, these Belgian Liège waffles are crispy on the outside with little pops of sugar throughout. After one bite, this will become your go-to breakfast or dessert!

If given the choice between waffles and pancakes, I choose waffles 9 out of 10 times - from bacon cheddar waffles to lemon ricotta waffles to Oreo waffles. While I like pancakes, I just love the added texture from waffles.

But have you ever had a Liège waffle? Or more importantly, have you ever heard of it? I hadn't until stumbling by Taste of Belgium in Cincinnati. Let's just say, I visited multiple times while I was there. They are smaller than the Belgian waffles you are thinking of so don't judge me.

What really makes these waffles outstanding are little pops of pearl sugar throughout the dough. You even get some on the outside that caramelizes as the waffle cooks!

They way I describe the delectable treats is they are a mix between donuts and waffles, and by waffles I mean the type you get at IHOP or the hotel.

If you have never heard of or made these Liège waffles, now is the time to try them. They are surprisingly easy to make and super addicting. I'll let you determine if that is a good or bad thing.

As with any recipe, you can mix up the ingredients if you want. Some substitutes include:

Add warm milk and yeast to bowl of stand mixer and let sit for 5 minutes. Add the eggs, butter and vanilla extract and mix until combined and then add 2 ⅔ cups of flour and salt and knead with dough hook until smooth.

Add the remaining cup of flour and mix until the dough is starting to pull away, about 5 minutes. Cover with plastic wrap for 30 minutes.

Use your hands to fold in the pearl sugar and divide the dough into 10-12 balls. Cook the waffle in the waffle iron according to manufacture's instructions.

What is the Difference Between Liège and Brussels Waffles?

Liège waffles are thick and small with rounded edges and pearl sugar where Brussels waffles are larger, lighter, has a rectangle shape and sprinkled with icing sugar.

An Americanized Belgian waffles is made with is more batter-like and leavened with baking powder instead of yeast.

What is Pearl Sugar?

Pearl sugar is sugar crystals that are compressed together to form large sugar pieces which won't dissolve when in baked goods. Unfortunately it can be hard to find in the US, but you can make your own.

I actually just order some from Amazon and it works out well.

What is the Best Waffle Maker?

For a traditional Liège waffle recipe, you need to use a Belgian waffle maker. It has deeper grooves which creates the thicker waffle needed for texture.

With that said, you can use a regular waffle maker and they will still taste amazing!

Can I Make Ahead?

Yes. Just let the dough rise overnight in the fridge instead of at room temperature. Fold in the pearl sugar when you are ready to make them the next morning.

You can easily make these Liège waffles ahead of time. Just let cool to room temperature once cook and place in an airtight container. You can keep in the freezer for up to 3 months.

Once ready to eat, place in a 250°F oven for 10 minutes or until warmed through.

Liège waffles are honestly meant to just eat on its own. They are that good. With that said, you can add toppings of your choice, including:

If you’ve tried this Liège waffles recipe or any other recipe on Chisel & Fork, please let me know how it turned out in the comments below! You can also follow me on Facebook, Instagram, Pinterest and YouTube to see more tasty meals and anything else I'm up to. 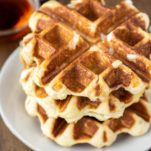