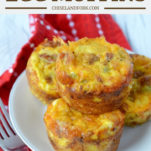 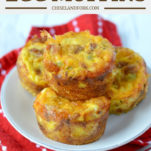 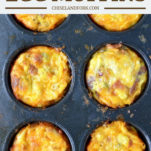 These hash brown egg muffins have hash browns packed into muffin tins to make a crispy nest and are then loaded with eggs, peppers, cheese and bacon! After being cooked, they can be frozen and reheated whenever you want to eat them.

I love breakfast that can serve a crowd - from blackberry french toast casserole to orange rolls.

And these hash brown muffins make a great breakfast or brunch and are perfect for the holidays. Even better, they can be frozen and just reheated when you're ready to eat.

Who doesn't love the holiday season? I feel like November and December always fly by as there is so much going on. For me and I'm sure most people, my favorite part about the holidays is being with family. And when I'm with family we eat, eat and eat some more! Brunch is a big thing for us, especially at Christmas so I'm always looking for new recipes to share.

The great thing about these has brown egg muffins is you can really make them year round but they really are perfect for a big family brunch as they couldn't be easier to prepare.

Yes there are a ton of ways to make eggs for a party including my mini ham, cheese and onion quiche, but to me these are pretty unique as you're combining a side like hash browns and eggs to make one cohesive dish. So if you're hosting this year or just love a good breakfast, give these hash brown egg muffins a try.

Do I Have to Use Bacon?

No. You can replace with sausage. I have and it's just as good. Really depends on what you're craving. You could even do prosciutto, which is a favorite of mine. But if you want to make vegetarian, just add some more peppers or another vegetable that you enjoy.

Like any recipe, you can adapt these hash brown muffins to your liking.

If you’ve tried these hash brown egg muffins or any other recipe on Chisel & Fork, please let me know how it turned out in the comments below! You can also follow me on Facebook, Instagram, Pinterest and YouTube to see more tasty meals and anything else I’m up to. 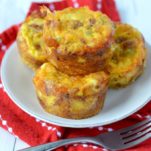