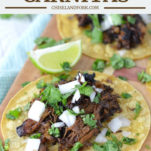 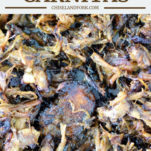 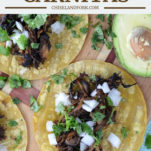 This crispy pork carnitas recipe uses a surprising ingredient, Coca-Cola, for flavor and then is finished under the broiler to get that crispiness you want.

I'm a huge fan of pork. I try to think of every way possible to use pork - from Salvadoran pupusas to oven roasted pulled pork.

Made by braising or simmering pork in oil until tender and then fried to crispy perfection. Everyone knows about Taco Tuesdays.

Well for our family, there is also Taco Mondays, Wednesdays, Thurs... you get the picture! When thinking about what Lauren and I have most often for dinner, it's probably some variation of tacos.

The first legit street tacos I ever had were authentic pork carnitas. I remember before even eating them, thinking it was odd to have a taco with no cheese.

I mean I thought tacos and cheese went together like peanut butter and jelly, but it was just some crispy pulled pork, fresh onion and cilantro with a squeeze of lime! After one bite my opinion changed and I've been hooked on simple old school tacos ever since.

While I've had about every type of taco imaginable, carnitas are still my all-time favorite! The key for me is to get the pork crispy. After trying a variety of recipes, this has become my go-to. So give this crispy pork carnitas recipe a try.

Do I Have to Use Pork Shoulder?

No. While I've used pork shoulder multiple times, I've actually given pork tenderloin a try and personally don't notice much of a difference. Yes there's a less fat so it doesn't caramelize as much, but it tastes great. It's a little healthier for you as well.

Do I Need to Use Coca-Cola?

No. You can easily substitute Coca-Cola for a light beer like Corona or chicken stock. I personally like Coke the best as it really helps caramelize the pork, which gives it great flavor.

Can I Make in Slow Cooker?

Yes. You still have to sear the pork in a skillet but then just transfer the pork to a slow cooker and add the rest of the ingredients. Then cover and cook on low for 6-8 hours, removing the lid for the last hour so the liquid can evaporate.

If you’ve tried this crispy pork carnitas recipe or any other recipe on Chisel & Fork, please let me know how it turned out in the comments below! You can also follow me on Facebook, Instagram, Pinterest and YouTube to see more tasty meals and anything else I'm up to. 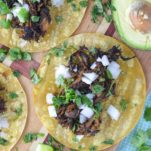