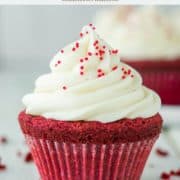 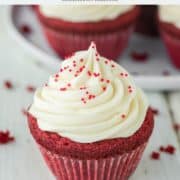 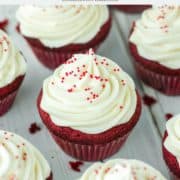 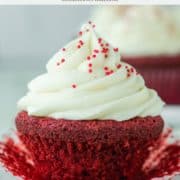 These Baileys red velvet cupcakes are classic cupcake kicked up a notch by adding some Baileys Red Velvet Cupcake liqueur in the batter and frosting.

I'm a fan of all things Baileys - from Baileys French toast to Baileys ice cream to a Baileys chocolate martini.

But did you know they make more than just their famous Irish Cream Liqueur? Until recently I didn't.

And then when at a liquor store recently I saw a Baileys Red Velvet Cupcake flavor. As I love Baileys and my wife loves a good red velvet cupcake, I figured it was worth a shot. We weren't disappointed as it tastes like a cupcake in a glass.

So with that in mind, I figured why not use it to make actual Baileys red velvet cupcakes. You basically take a standard recipe and swap out some of the milk for the Baileys. It is just enough where you get a hint of the flavor in every bite. And that bright red color doesn't hurt to look at!

Like any recipe, you can switch up the ingredients if you want. Some variations include:

Mix the dry ingredients in a bowl and set aside. Cream together the sugar, butter and oil until fluffy before adding the egg yolks, vanilla extra and vinegar, beating until combined.

Whisk together the buttermilk, food coloring and Baileys. Then beat together the egg whites on high speed until fluffy peaks form.

Alternate adding the dry ingredients and the buttermilk to the wet ingredients, ending with the flour. Then fold in the egg whites until just combined. Add to a cupcake tin with paper liners, just ⅔ of the way full. Bake at 350°F for 15-18 minutes or until done. Remove from the tins and place on a cooling rack.

Beat the cream cheese and butter for 3 minutes before adding the sugar, Baileys, vanilla extract and salt, beating another 3 minutes. Pipe on the cooled cupcakes.

What is the Best Food Coloring?

You can use red food coloring, gel food coloring or even beet powder to get the red color you want. Or you could just omit entirely. It doesn't affect the flavor, just the look!

I personally like gel food coloring, as you don't need to add a ton.

Can I Replace the Buttermilk?

You need the acid in it to react with the baking soda and create the rise.

If you don’t have buttermilk you can easily make it at home. Simply add 1 tablespoon of vinegar or lemon juice to 1 cup of milk. Let stand at room temperature for 10 minutes and it’s ready.

Why Put Vinegar in the Cupcakes?

Although the buttermilk and cocoa powder has acid, the extra vinegar just allows the baking soda to do its work in creating a fluffy cake.

If you don't have vinegar, lemon juice will work as well.

How Do I Make a Light and Fluffy Cupcake?

Yes it is an extra step, but beat the egg whites separately. By beating the egg whites, you incorporate air which creates a light cupcake. After trying this, you will never go back.

Can I Make These Into a Cake?

Yes. I have a southern red velvet cake recipe. Just use that and substitute half of the liquid with the Baileys.

How Long Do Cupcakes Last?

To maximize the shelf life of cupcakes, place them in a covered airtight container or cover with plastic wrap to prevent them from drying out.

The equipment you use is important to how the cupcakes turn out. What is needed is the following:

If you’ve tried these Baileys red velvet cupcakes or any other recipe on Chisel & Fork, please let me know how it turned out in the comments below! You can also follow me on Facebook, Instagram, Pinterest and YouTube to see more tasty meals and anything else I'm up to. 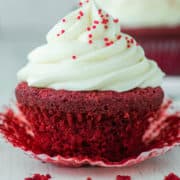