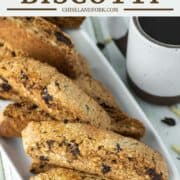 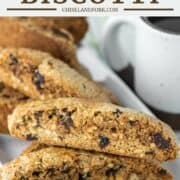 This amaretto biscotti is crisp and has a subtle almond flavor throughout, making them perfect for dunking in your favorite drink.

When it comes to the holidays, one of the best desserts to make for friends is biscotti. Because it is meant to be crisp, you don't have to worry about it going stale as quickly as a cookie.

And I love biscotti - from orange pistachio biscotti to chocolate hazelnut biscotti, there are a ton of options out there. And this amaretto biscotti is the latest and greatest.

Like any recipe, you can mix up some of the ingredients for the amaretto biscotti. Some variations include:

Sift together the dry ingredients in a bowl and set aside.

With an electric mixer or stand mixer, beat together the butter, sugar, amaretto and almond extract for about 1 minute. Add 1 egg at a time, beating until each is combined.

With the mixer on low, add the flour, mixing until just combined. Fold in the almonds and chocolate and chill in the fridge for an hour.

Dive the dough in half and place on a baking sheet. Shape into two 11x2 inch or 8x4 inch logs. Brush each with egg white and sprinkle some sugar on top.

Arrange the slices back on a baking sheet. Bake for 20 minutes, flipping halfway through.

Is Biscotti Supposed to be Hard?

Yes. They are twice baked for a reason. This makes them crunchy and perfect for dipping in your favorite cup of coffee.

If your biscotti is soft, it was more than likely because you didn't let it cool completely before storing. To fix this, just bake at 300°F for 5-10 minutes.

Why Did My Biscotti Crack on Top?

Cracks on the surface are normal. It is nothing to be worried about. Believe me when I say it is all about the taste.

How Do I Cut Biscotti Without Breaking Them?

First you need to use a serrated knife and second, you need to allow them cool for 10 minutes before slicing after the first bake. They should be cool to the touch.

If you cut immediately, the slices will crumble and if you wait too long, the biscotti will be hard to cut.

Can I Make Ahead?

Yes. You freeze the dough before making. Shape the dough into 2 logs and wrap in plastic wrap before placing in a sealable bag.

When ready to bake, remove the logs from the freezer and thaw the dough until pliable. From there proceed with the baking portion of the recipe.

How Long Does Homemade Biscotti Last?

If in an airtight container, biscotti can last for 2 weeks which is part of the reason they're so popular as gifts. You can also place in the freezer and it will last for 3-4 months.

What to Serve with Biscotti?

Biscotti is hard in part because it is normally served with a drink to dunk in like coffee. It is traditionally considered a dessert in Italy so is served with a cup of coffee, but can just as easily be eaten for breakfast or a snack for that matter.

The equipment you use is important to how the amaretto biscotti turn out. What is needed is the following:

If you’ve tried this amaretto biscotti or any other recipe on Chisel & Fork, please let me know how it turned out in the comments below! You can also follow me on Facebook, Instagram, Pinterest and YouTube to see more tasty meals and anything else I'm up to. 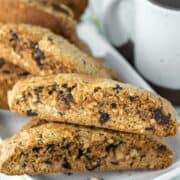