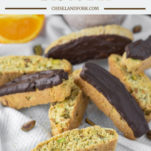 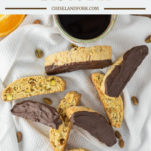 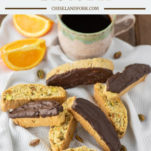 This orange pistachio biscotti is destined to be dipped in a cup of coffee, making them great for breakfast or dessert.

Last weekend, Lauren and I went to her parents beach house. Her dad had made some coffee cashew biscotti, and Lauren was obsessed. I knew she liked biscotti, but didn't realize how much.

So I suggested we make some ourselves. I had never actually made biscotti, but knew the basics of how this Italian cookie was made. It really just means twice baked as you bake the dough in log format, then slice and bake again, which gives the biscotti it's known crispness.

So when trying to decide what biscotti to make, Lauren mentioned that a patient of hers had brought in some orange biscotti that she really enjoyed. And with it nearing the end of orange season here, I figured it was meant to be made.

Needless to say, this orange pistachio biscotti was a hit and we'll be making more soon. Shoot, I'll probably be making as many different flavors as I can imagine. Oh and if you are up for it, you can dip them in some chocolate because chocolate never hurts right?

1. Sift flours and baking soda in medium bowl. Whisk in salt and set aside. (Note - I like the combination of all-purpose and whole wheat flour for texture but you can use all of one or the other)
2. In bowl of stand mixer, beat together butter, orange zest and vanilla extract until light and fluffy, about 1 minute.
3. Add eggs one at a time with mixer on medium speed and mix until combined.
4. With mixer on low speed, slowly add flour mixture and mix until just combined. Fold in pistachios. Cover bowl and place in fridge for 1 hour.

5. Form dough into two logs and place on parchment-lined baking sheet. You want them to be about ¾ inches thick and either two 11x2 inch logs or two 8x4 inch longs. It really depends on the size biscotti you want.
6. Brush top of biscotti with beaten egg white and sprinkle 1 teaspoon of sugar on each log. Bake at 350°F for 30 minutes or until the top is lightly brown.
7. Let cool for 10 minutes and then use a serrated knife to cut the biscotti 1 inch thick. If you want a longer biscotti, cut at a diagonal. Place cut side down on baking sheet
8. Bake for 8 minutes at 350°F and then flip and bake for another 8 minutes. The orange pistachio biscotti should still have a soft center but it will harden as it cools. Transfer to a wire rack to cool. If dipping in chocolate, melt chocolate by placing in heatproof bowl and microwave in 30 second intervals until chocolate is smooth. Dip biscotti and place back on wire rack to cool.

How Do I Cut Biscotti Without Breaking Them?

First you need to use a serrated knife and second, you need to allow them cool for 10 minutes before slicing after the first bake. They should be cool to the touch.

If you cut immediately, the slices will crumble and if you wait too long, the biscotti will be hard to cut.

What to Serve with Biscotti?

Biscotti is hard in part because it is normally served with a drink to dunk in like coffee. It is traditionally considered a dessert in Italy so is served with a cup of coffee, but can just as easily be eaten for breakfast or a snack for that matter.

How Long Does Homemade Biscotti Last?

If in an airtight container, biscotti can last for 2 weeks which is part of the reason they're so popular as gifts. You can also place in the freezer and it will last for 3-4 months.

Why Did the Biscotti Become Soft?

It was more than likely because you didn't let it cool completely before storing. To fix this, just bake at 300°F for 5-10 minutes.

If you’ve tried this orange pistachio biscotti or any other recipe on Chisel & Fork, please let me know how it turned out in the comments below! You can also follow me on Facebook, Instagram, Pinterest and YouTube to see more tasty meals and anything else I'm up to. 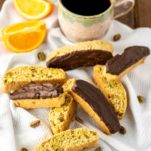