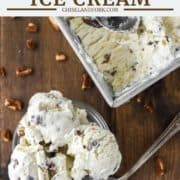 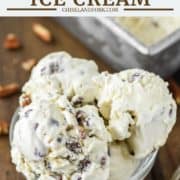 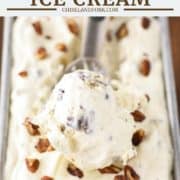 This no churn butter pecan ice cream doesn't need a machine to create that rich creamy texture with a hint of pecans in every bite.

But up to this point all of my ice cream recipes involved using an ice cream machine. I still swear by it, but I know not everyone has one. So how to make some ice cream without a machine?

By the no churn method of whipping heavy cream and adding condensed milk. It is a pretty simple base that is very versatile with the ingredients you add. I finally decided to give this version a try when I saw a recipe shared on Half Baked Harvest.

I ended up going pretty simple with my first no churn recipe with this butter pecan ice cream. It is one of the top 5 most popular ice creams in America for a reason.

I did mix it up a little bit by using maple extract instead of vanilla. But the bites of buttered pecans are what make this dessert. And to answer your question, yes this is super creamy and just as good as a pint at the store!

Cook pecans with butter and sugar in a skillet over medium heat for about 3-5 minutes, or until the pecans are toasted. In a large bowl, whip the heavy cream until stiff peaks form.

Mix together the condensed milk, extracts and salt before folding into the whipped cream until just combined.

Add in the pecans before transferring to a loaf pan and freezing for at least 6 hours.

What is No Churn Ice Cream?

Ice cream makers work by slowly incorporating air while churning the ingredients with a mixing paddle in an insulated freezer bowl.

If you don't incorporate air, the mixture just is a frozen block of cream.

So the no churn method involves incorporating air by whipping the heavy cream which helps with a scoopable ice cream.

Can You Make Ice Cream with Half-and-Half Instead of Heavy Cream?

You can although I highly recommend trying to use heavy cream as the high fat content creates the creamy texture when the ice cream is cooled. If you use half-and-half, it won't be as creamy and could get icy.

How Do I Keep It From Being Icy?

So in general, eggs help prevent ice crystals but I also add Xanthan gum a lot of times to my recipes. And since this recipe doesn't use eggs, Xanthan gum helps stabilize the ice cream and prevents ice crystals from forming.

The usual problem with homemade ice cream is it will only lasts a couple of days before ice crystals form. But the Xanthan gum helps battle this. Just add ¼ tsp.

How Do I Store?

In a perfect world you have an ice cream container with a lid, but I know not everyone has that. You can also store in a loaf pan and cover with plastic wrap.

No churn ice cream will last about 2 week in the freezer before forming ice crystals. That's no problem though as this will go fast!

If you’ve tried this no churn butter pecan ice cream recipe or any other recipe on Chisel & Fork, please let me know how it turned out in the comments below! You can also follow me on Facebook, Instagram, Pinterest and YouTube to see more tasty meals and anything else I'm up to. 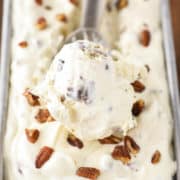