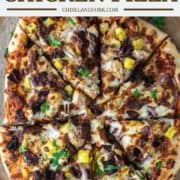 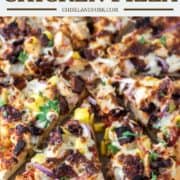 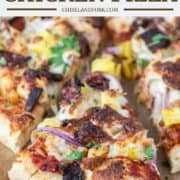 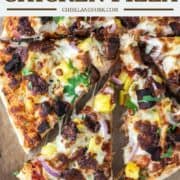 Instead of the traditional ham, this Hawaiian chicken pizza recipe not only adds chicken as a topping, but bacon as well. And of course you can't forget the pineapple!

There are so many pizza options out there - from a Philly cheesesteak pizza to goat cheese pizza to a broccoli rabe pizza to homemade pepperoni pizza.

But one of the most famous pizzas out there is the Hawaiian pizza. I like you probably assumed it was created in Hawaii, hence the name. But no it was invented in Canada.

The original creator, Sam Panopoulos, had some extra pineapple on hand and decided to add it to a pizza and customers loved it. He called it Hawaiian because of the brand of canned pineapple he used.

It quickly took hold to the US and here we are. I know it can be a polarizing dish for some people. But to me it is all about balancing acidity and salty. And today I decided to mix it up even more and added chicken and used bacon instead of ham.

So if you love the combo of sweet and salty, this Hawaiian chicken pizza recipe is one that is worth a try.

As with any recipe, you can mix up the ingredients you use. Some variations include:

Cook the bacon in a skillet and remove when crispy, reserving some fat to cook the chicken. Then cook the chicken for 4 minutes per side or until done. Shred and set aside.

Evenly spread the sauce and some of the cheese before adding the chicken, bacon, pineapple and onion. Top with the remaining cheese. Broil on a pizza stone for 4-5 minutes, or until bubbly on top. Top with some cilantro if using.

Do I Have to Make My Own Pizza Dough?

Of course not. I just like making pizza dough, but you can buy fresh pizza dough where you roll out yourself or pre-baked crusts.

I still suggest buying the fresh dough. Most grocery stores carry it these days, but Trader Joe’s has the best!

Can I Use Canned Pineapple?

Yes you can, but make sure you drain the excess liquid and pat the pineapple dry with a paper towel before using.

Why Use a Pizza Stone?

The stone holds heat and gives you a nice crust on the bottom which is important in a great pizza.

How Do I Cook a Pizza without a Pizza Stone?

I know not everyone has a pizza stone. If you don't, use a cast iron skillet. Just place some oil in the skillet before adding the dough and toppings and bake on the bottom third of the rack instead.

How to Reheat Pizza?

Let's be honest, there isn't anything wrong with cold pizza. But if you must reheat this Hawaiian chicken pizza, don't do it in the microwave or it will get soggy.

Just place on a baking sheet in the oven at 375°F for about 10 minutes or until warmed through.

If you’ve tried this Hawaiian chicken pizza recipe or any other recipe on Chisel & Fork, please let me know how it turned out in the comments below! You can also follow me on Facebook, Instagram, Pinterest and YouTube to see more tasty meals and anything else I'm up to. 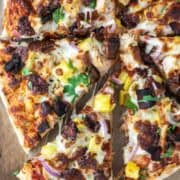