You Are Here: Main Course → Pizza 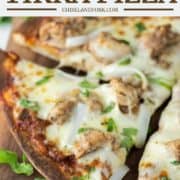 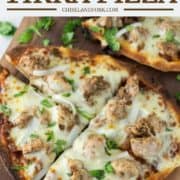 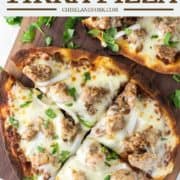 But at first glance, this might be the strangest to date. Chicken tikka masala is one of my favorite meals. Spiced chicken in a creamy sauce. I mean what is better? But to put it on pizza? I mean why not?

I basically took my chicken tikka masala recipe, put it on some naan and added cheese. And it couldn't have been tastier!

The sauce works great as the base and the spiced chicken pairs well with the melty cheese. And why naan? Well it is easy to buy and very prevalent in India. So mix it up and give this chicken tikka pizza a try!

As with any recipe, you can switch things up if needed. Some variations include:

Place the chicken in a bowl with the marinade and let sit in the fridge for 1 to 4 hours. Once ready, heat coconut oil over medium-high heat and add the chicken, cooking until browned and done.

Start the sauce by melting some butter as well as onion, cooking for 5 minutes. Add garlic and jalapeño and cook for another minutes. Stir in the spices and salt.

Add the tomato sauce, simmering for 2 minutes before stirring in the cream and yogurt.

Top each piece of naan with some sauce, cheese, chicken and onion and bake on the oven rack at 425°F for 8 minutes. Top with some fresh cilantro if desired.

What is Chicken Tikka Masala?

It is spiced chicken, usually roasted and simmered in a tomato and cream based sauce that is loaded with spices.

While similar, it is different from curry sauce in that there is no curry.

What is the Difference Between Masala and Curry?

Garam masala tends to be sweeter because of this.

What if I Don't Have Garam Masala?

No problem. Just make your own! You more than likely have all of the spices on hand.

Can I Replace the Naan?

Yes. I love the pairing but pita bread also works great. Or if you want a more traditional pizza, this no-knead pizza dough is my go-to.

How to Reheat Pizza?

Let's be honest, there isn't anything wrong with cold pizza. But if you must reheat this chicken tikka pizza, don't do it in the microwave or it will get soggy.

Just place on a baking sheet in the oven at 350°F for about 10 minutes or until warmed through.

If you’ve tried this chicken tikka pizza recipe or any other recipe on Chisel & Fork, please let me know how it turned out in the comments below! You can also follow me on Facebook, Instagram, Pinterest and YouTube to see more tasty meals and anything else I'm up to. 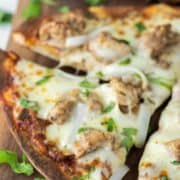