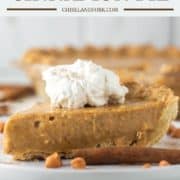 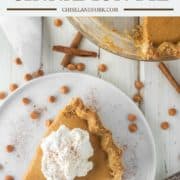 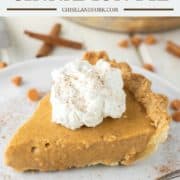 This butterscotch cinnamon pie is put over the top with a homemade buttery crust and a hint of cinnamon in the custard filling.

There are just so many options when it comes to pie recipes, from an apple custard pie to a strawberry blueberry pie to a homemade cherry pie to a peach mango pie.

Let's be honest, when you hear pie, you think of fruit most of the time. But as I said the possibilities are endless and one of the OGs is a butterscotch pie which is a type of custard pie that tastes like caramel.

But as I like to do with many classic recipes is add a little twist to it. And that comes with the addition of cinnamon. I mean cinnamon makes everything better.

The end result with this butterscotch cinnamon pie recipe is a light textured, yet richly caramel pie with a little cinnamon throughout.

Pulse together the dry ingredients before adding the butter and pulsing until it becomes coarse meal. Add the yolk, water and extract and pulse until it just comes together.

Turn the dough on a floured surface and form into a ball. Wrap in plastic wrap and place in the fridge for 1 hour. Once ready, remove and roll the dough so that it is about 3 inches longer than you pie dish and is between ⅛ inch and ¼ inch in thickness.

Add dough to pie plate and crimp the edges. Place back in the fridge for 30 minutes. Crunch up parchment paper and line pie crust with it as well as some pie weights. Bake on a preheated baking sheet at 375°F for 15 minutes.

Remove from the oven and take out the parchment paper with weights. Poke some holes in the crust and bake an additional 15 minutes or until golden brown.

Whisk the egg yolks in a bowl until pale yellow and set aside. Heat the milk, sugar and cornstarch in a saucepan over medium heat until slightly thickened.

Temper the eggs by pouring a few spoonfuls of the hot milk mixture into the eggs, whisking constantly.

Add the tempered eggs to the milk mixture and turn heat back on, cooking until thickened further. Remove from heat and stir in the remaining ingredients.

Pour the filling over the cooled pie crust and smooth into an even layer. Place the butterscotch cinnamon pie in the fridge for at least 6 hours before serving.

Pie vs. Tart: What’s the Difference?

The biggest difference is in the texture. A pie crust should be flaky, light, tender and crisp. A tart crust is crumbly, rich, crisp and firm.

A pie can be just a bottom crust only, a top crust only or a top and bottom crust, while a tart is always a bottom crust. Pies are also always served in the dish they are baked in, while tarts are removed from the pan before being served.

What is Blind Baking?

Blind baking is a term for the process of pre-baking a pie crust before the filling is added.

One key though is to make sure the dough is cold and rested so it doesn't shrink when baking.

How Do I Prevent a Soggy Bottom?

You do this by blind baking the crust for about 30 minutes before adding the custard.

Why is My Custard Runny?

This usually happens if you don't cook the filling long enough on the stovetop. You want to give the cornstarch a chance to react with the heat. You also need to let it cool for at least 6 hours before serving.

How Do I Keep My Crust from Browning?

Since this is a blind bake, you don't cook as long as most pies, but use a pie shield if the edges are starting to brown before the bottom.

Yes. You can make the crust ahead of time and freeze before baking. You will just need to bake for an extra 15 minutes.

You can also bake and then just place in the fridge for 2-3 days before serving. This butterscotch cinnamon pie needs to sit for a least 6 hours anyway in the fridge.

How to Temper Eggs

If you've never tempered eggs, it can be a little intimidating but it actually is quite easy.

Tempering just means you are getting the eggs ready to put in a hot custard. If you just pour the eggs in the hot filling, they'll scramble, so you want to do it very slowly.

You do this by pouring a few spoonfuls of the hot mixture into the egg yolks, whisking constantly. By doing this, you bring it to temperature of the butterscotch mixture. You then slowly pour the egg yolks back in the the mixture and whisk constantly.

You cook for another couple of minutes and then add some butter at the end. If you want to 100% make sure you have no scramble eggs, pour it through a fine mesh strainer.

The equipment you use is important to how the butterscotch cinnamon pie recipe turns out. What is needed is the following:

If you’ve tried this butterscotch cinnamon pie recipe or any other recipe on Chisel & Fork, please let me know how it turned out in the comments below! You can also follow me on Facebook, Instagram, Pinterest and YouTube to see more tasty meals and anything else I'm up to. 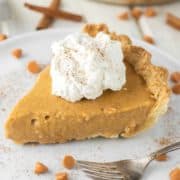