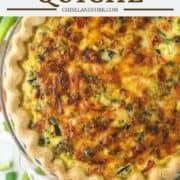 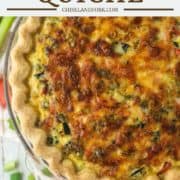 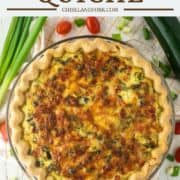 Loaded with a ton of vegetables, cheese, eggs and milk, this veggie quiche is the weekend breakfast everyone will enjoy.

When it comes to breakfast, one of my favorites is a homemade quiche - from a chorizo quiche to a prosciutto quiche to a bacon potato quiche.

And as you might have noticed in the names, they all have meat. Well every now and then I feel like some vegetables and not just as a side, but as the main dish.

That's where this veggie quiche recipe comes into play. What's great about this recipe, is you can really throw in whatever vegetables you like. The key is keeping the egg to milk ratio the same, 1 egg for every ½ cup of milk.

This gives you that lovely silky texture you want in a quiche.

Like any recipe, you can adapt this quiche to your liking.

Pulse together the dry ingredients before pulsing in the butter with 15 pulses. Add the egg yolk, water and vanilla extract and pulse until it starts to clump together. Form into a ball on a lightly floured surface and place in fridge for at least an hour.

Roll out one disk to about ⅛ inch in thickness and press into a pie plate. Cut the edges to about 1 ½ inches overhang and fold over and flute the edges.

Cook the zucchini, broccoli and pepper in the skillet over medium heat with olive oil for 5 minutes before adding the garlic, green onions and tomato. Whisk together the eggs, milk, salt and pepper in a bowl.

Add 1 ½ cups of the cheese to the bottom. Add the veggie mixture on top before adding the egg mixture. Add the remaining cheese and bake in the oven at 350°F for 40-55 minutes or until the middle is slightly jiggly.

What is the Difference Between a Quiche and Frittata?

A frittata is a quiche without the crust. That’s really the only difference. With a quiche, you place the crust in a skillet or pie serving dish and then bake with egg mixture, whereas the frittata’s “crust” is formed by the eggs cooking and browning on the outside.

If you want a crustless quiche, use a pie dish and just spry with cooking spray before adding the egg mixture.

Do You Bake the Crust of a Quiche First?

The technique is called "blind baking" to prevent a soggy bottom. I skip this by adding a preheated baking sheet so the bottom gets cooked quicker. However you can do a blind bake as well.

How Do I Know When the Quiche is Done?

The best quiche jiggles slightly when you cut into, so don't overbake it. This veggie quiche is done when the edges are set but the center still wobbles slightly.

Yes. You can bake and then let cool before placing in the fridge for up to 3 days. To reheat, cover with foil and bake at 325°F until warmed through.

The equipment you use is important to how the veggie quiche recipe turns out. What is needed is the following:

If you’ve tried this veggie quiche recipe or any other recipe on Chisel & Fork, please let me know how it turned out in the comments below! You can also follow me on Facebook, Instagram, Pinterest and YouTube to see more tasty meals and anything else I'm up to. 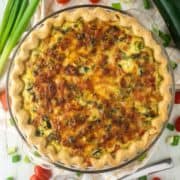