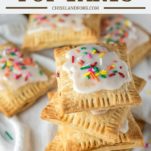 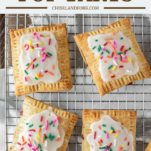 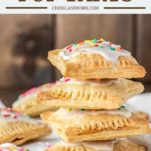 These homemade strawberry pop tarts are made with an easy and flaky pastry crust, filled with strawberry jam and topped with vanilla icing. If you grew up on Pop-Tarts, then these will bring back those childhood memories.

There is something about making a dish at home that you can buy at the store or a restaurant - from chocolate frosted donuts to homemade bagels. It just tastes better.

Growing up, I ate quite a few Pop-Tarts. My go-to was always frosted strawberry pop tarts. Yes I know they weren't the best things for you, but I mean what's better than something that you can just pull out of a package and throw in the toaster. Or even eat cold if you don't have time for the toaster.

Now enter these homemade pop tarts. Make no mistake, they take longer than just throwing something in the toaster but the extra effort is so worth it in the end.

The key to a good pop tart is the crust and this pop tart crust can be done either by hand or in a food processor. It's flaky and buttery and pieces will break off when you bite into it, just like a good old fashioned Pop-Tart.

Really the biggest difference is you can't throw these in the toaster after putting the frosting on. The frosting will just melt right off. To be honest, I'm not sure how Kellogg's was able to get the frosting to not just melt. Must be packed with preservatives or something.

What's really great about these homemade pop tarts though is you really can make whatever you like. The most work is the pop tart crust so the filling is easy comparatively. A frosting isn't necessary but to me makes all the difference. However you can eat them "naked" no problem.

Either way after having these homemade strawberry pop tarts, you'll never buy from the store again.

How to Make Strawberry Filling

How to Make Homemade Pop Tarts

The Key to Good Pastry Crust

So you might have seen this by now, but the key to good pastry crust that's super flaky is vodka. Why is that you may ask? Since vodka is alcohol, it actually burns off quickly in the oven which dries out the crust. It also does not contribute to the formation of gluten which is key to a good pie crust.

You don't have to use a fork or pasty cutter to make the dough. Using a food processor, pulse together the flour and salt until combined. Add butter and pulse until mixture becomes coarse meal, about 15 pulses.

Add the water/vodka mixture to food processor and pulse until it starts to clump together. DO NOT pulse until ball is formed. It should be crumbly with large clumps of dough. From there, complete the other steps.

Can I Use Store-Bought Jam?

How Do I Know When the Pop Tart Crust is Done?

When it is golden brown and doesn't bounce back when you tough it, it is done?

Can I Freeze Homemade Pop Tarts?

Yes Let the homemade pop tarts cool completely before placing in a freezer bag for up to 3 months. When ready to eat, throw them in the oven at 350°F for 10 minutes or until heated through.

DO NOT throw in the toaster, as the icing will melt right off.

If you’ve tried this strawberry pop tarts or any other recipe on Chisel & Fork, please let me know how it turned out in the comments below! You can also follow me on Facebook, Instagram, Pinterest and YouTube to see more tasty meals and anything else I'm up to. 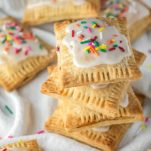