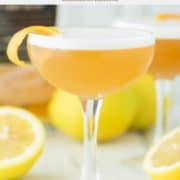 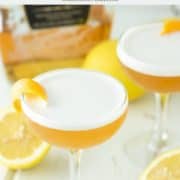 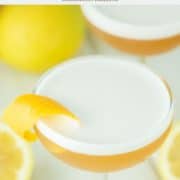 With dark rum, fresh lemon juice, maple syrup and an egg white this rum sour is a simple cocktail that is both sweet, tart and refreshing.

I can't get enough cocktails these days - from an apple mojito to limoncello spritz to a peach martini to an apple cider cocktail to an Aperol negroni.

While the classic sour cocktail is made with whiskey, I had a big bottle of dark rum on hand so I wanted to mix it up.

And while I added the egg white for the froth that a sour is known for, it isn't necessary. Either way, this rum sour is a drink that everyone will enjoy.

Add all of the ingredients to a cocktail shaker without ice. Shake for 30 seconds. Add ice and shake for an additional 30 seconds. Strain into a chilled glass and top with an orange peel.

What is a Sour?

A sour is a mixed drink with a base liquor, citrus juice, sweetener and sometimes egg whites. They come in many varieties.

Are there Rum Substitutes?

If you want a more traditional sour cocktail, just use the same amount of whiskey.

Do I Have to Use Egg White?

No. Egg whites will have very little effect on the cocktail's taste. They add a nice rich, silky, foam texture. So it is all about preference.

If you want some foam but are concerned about raw egg, you can try Ms. Better's Bitters. It is vegan and actually works in creating foam!

What is the Best Glass to Serve?

I personally like using a coupe glass, but an old fashioned whiskey glass works as well.

While there are a few varieties, there are 4 main types of rum, and they all vary slightly in their flavor. Just depends on what you are looking for.

If you’ve tried this rum sour or any other recipe on Chisel & Fork, please let me know how it turned out in the comments below! You can also follow me on Facebook, Instagram, Pinterest and YouTube to see more tasty meals and anything else I'm up to. 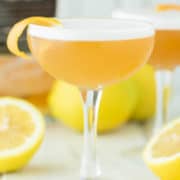