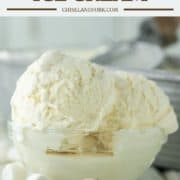 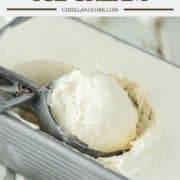 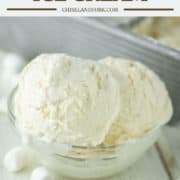 But all of these require an ice cream maker. And while I swear by it, I realize not everyone has one. That's where the no churn method comes into play. Simply whip up some heavy cream, stir in condensed milk and you have ice cream after freezing it!

But the beauty of this marshmallow ice cream is not only do you feel like your eating frozen marshmallows, the marshmallow fluff helps create a super smooth texture as it doesn't freeze hard.

It is really one of those recipes where you question how easy it just is. But believe me when I say, the truth is in the pudding or should I say ice cream. Oh and this would go great on some sprinkle brownies or a chocolate chip loaf cake. Just saying...

Like any recipe, you can add other ingredients to kick it up a notch. Some variations include:

Whip the heavy cream in a large bowl until stiff peaks form. Mix together the rest of the ingredients in another bowl until combined.

Fold in the condensed milk mixture into the whipped cream until just combined. Transfer to a 9x5 loaf pan and freeze for at lease 6 hours.

What is No Churn Ice Cream?

Ice cream makers work by slowly incorporating air while churning the ingredients with a mixing paddle in an insulated freezer bowl.

If you don't incorporate air, the mixture just is a frozen block of cream.

So the no churn method involves incorporating air by whipping the heavy cream which helps with a scoopable ice cream.

Can You Make Ice Cream with Half-and-Half Instead of Heavy Cream?

You can although I highly recommend trying to use heavy cream as the high fat content creates the creamy texture when the ice cream is cooled. If you use half-and-half, it won't be as creamy and could get icy.

How Do I Keep It From Being Icy?

So in general, eggs help prevent ice crystals but I also add Xanthan gum a lot of times to my recipes. And since this recipe doesn't use eggs, Xanthan gum helps stabilize the ice cream and prevents ice crystals from forming.

The usual problem with homemade ice cream is it will only lasts a couple of days before ice crystals form. But the Xanthan gum helps battle this. Just add ¼ tsp.

How Do I Store?

In a perfect world you have an ice cream container with a lid, but I know not everyone has that. You can also store in a loaf pan and cover with plastic wrap.

No churn ice cream will last about 2 week in the freezer before forming ice crystals. That's no problem though as this will go fast!

The equipment you use is important to how the recipe turns out. What is needed is the following:

If you’ve tried this marshmallow ice cream recipe or any other recipe on Chisel & Fork, please let me know how it turned out in the comments below! You can also follow me on Facebook, Instagram, Pinterest and YouTube to see more tasty meals and anything else I'm up to. 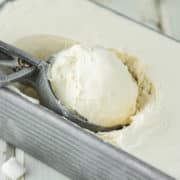