You Are Here: Home → Main Course 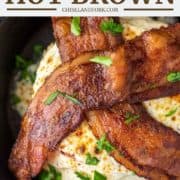 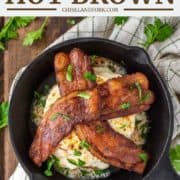 If you're looking for true comfort food, look no further than this Kentucky hot brown recipe consists of turkey, bread, tomato, Mornay sauce and bacon.

If you look up the definition of comfort food, it is food that provides a nostalgic or sentimental value to someone, and may be characterized by its high caloric nature, high carbohydrate level, or simple preparation.

While I didn't grow up having the Kentucky hot brown, it definitely checks boxes 2-4 of the previous definition.

For those that follow the blog, you know I try to balance healthy recipes with tasty recipes that might be a little higher on the calorie end. It's all about balance and today is one of those dishes I really enjoy, but only have once a year. It actually started a couple of years ago when I wanted to make something specifically for the Kentucky Derby.

The first thing that came to mind was the Kentucky hot brown, which was made famous by The Brown Hotel in Louisville. After making it once, I instantly decided to make it a tradition.

Today is obviously not the Derby, but you don't need that as a reason to make this comforting dish. If you've never had one, you truly are missing out, but now is the day to change that.

As with any recipe, you can mix up some of the ingredients. Some variations include:

Rub butter all over turkey and season with salt and pepper. Place on a baking sheet in a preheat oven at 450°F. Immediately lower to 350°F and roast for 1 hour or until turkey is done.

Melt butter over medium heat in saucepan. Add flour and cook for 2 minutes. Whisk in the half-and-half and cook until it simmers. Remove from heat and whisk in the cheese as well as a pinch of nutmeg, salt and pepper.

Assemble the hot browns. Place one piece of toast before adding ½ lb of turkey. Add some sliced tomato on top before pouring ¾ cup of the sauce over top. Sprinkle some cheese and broil for 2 minutes. Remove from the oven and top with two slices of bacon, paprika and parsley.

Why is It Called Kentucky Hot Brown?

Created late at night at The Brown Hotel, head chef Fred Schmidt used what he had in the kitchen and decided to name it after the hotel.

What is Mornay Sauce?

A Mornay sauce is just a fancy word for a cheese sauce or béchamel. It is usually made with Gruyère but we make it with Pecorino Romano.

What is the Best Type of Bread?

You want to use thickly cut bread so Challah, sourdough, Ciabatta or even white bread all work.

Do I Have to Use Mini Skillets?

No. I just like the look of them but understand not everyone has mini cast iron skillets. You can simply just place the hot browns on a baking sheet.

If you’ve tried this Kentucky hot brown recipe or any other recipe on Chisel & Fork, please let me know how it turned out in the comments below! You can also follow me on Facebook, Instagram, Pinterest and YouTube to see more tasty meals and anything else I'm up to. 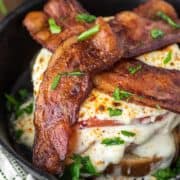