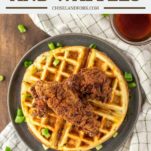 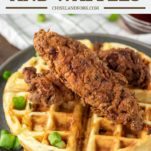 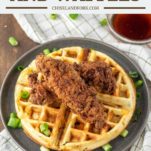 This fried chicken and waffles with hot maple syrup is turned up a notch with bacon and cheddar waffles, making it hard to top.

By this point you've probably caught onto the chicken and waffles trend. But I imagine it has just been standard old waffles - not bacon and cheddar waffles!

I remember the first time I ever had fried chicken and waffles. It was at this hole-in-the-wall breakfast spot in Jacksonville called Metro Diner. They gave you a whole half chicken with a waffle and hot maple syrup.

And if it is on the menu, I can guarantee you I'm trying it. I mean what is not to like. Everyone loves fried chicken right? And waffles are pretty dang good on their own. So why not combine them?

This recipe consists of chicken tenderloins that have been soaked in buttermilk to keep them juicy and then fried to perfect. But what puts them over the top is the waffles that are loaded with cheese, bacon and scallions.

So if you want to create your own chicken and waffles recipe, I suggest giving this one a try!

How to Make Fried Chicken

How to Make Waffles

However you really can use whatever batter you want in either type of waffle maker and it will work.

These waffles were actually made in Belgian waffle maker and turned out great!

You want an oil that has a high smoke point and is neutral in flavor so canola or vegetable oil work best.

If you want a little flavor and aren't allergic, peanut oil is a great option as well.

There is an art to reheating fried chicken so it stays crispy. You can't just throw it in the microwave.

Preheat the oven to 400°F and pull out the chicken from the fridge. Fit a wire rack inside a baking sheet and place chicken on top. Bake for 15 minutes, or until the skin feels hot and crisp.

Do NOT cover with aluminum foil as you will steam the chicken.

You can also throw the waffles in at the same time to reheat them.

What If I Don't Have Buttermilk?

If you don’t have buttermilk you can easily make it at home. Simply add 1 tablespoon of vinegar or lemon juice to 1 cup of milk. Let stand at room temperature for 10 minutes and it’s ready.

Do I Have to Soak the Chicken in the Buttermilk?

You don't HAVE to, but it is important and acts as a brine. The buttermilk helps break down the chicken to make it juicer and helps the breading stick.

What is the Best Temperature for Frying?

350°F is the best temperature. However it is important to not overcrowd the skillet with the chicken or you will lower the temperature of the oil and not get crispy skin.

How Do I Keep Everything Warm While Making the Chicken and Waffles?

Use the oven at 200°F to keep the waffles and fried chicken warm while you are making everything in batches.

If you’ve tried these fried chicken and waffles recipe or any other recipe on Chisel & Fork, please let me know how it turned out in the comments below! You can also follow me on Facebook, Instagram, Pinterest and YouTube to see more tasty meals and anything else I'm up to. 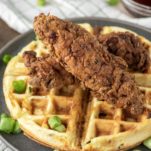