You Are Here: Home → Appetizers 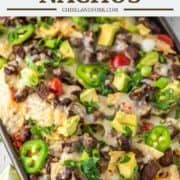 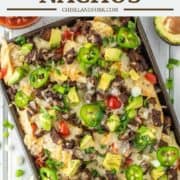 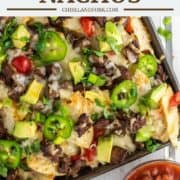 With juicy and tender beef, tortilla chips, cheese and your favorite toppings, these carne asada nachos are perfect as an appetizer or main course.

But nachos have a spot in my heart. There is just something about them. The crispy chips topped with gooey and melty cheese and your favorite toppings. I mean who doesn't like nachos?

And instead of my-go chicken, I thought I'd mix it up and use beef. And not just any beef, I used carne asada which actually comes from my carne asada tacos.

Most of the effort of this dish comes from just dicing the flank steak. Once done, you just toss it in the spices and juices and then assemble the nachos and bake. And with that you'll have delicious carne asada nachos.

Use a sharp knife to cut against the grain into ½ cubes. Add to a large bowl and toss with the marinade ingredients. You can let sit for an hour in the fridge or use immediately.

Add olive oil to large skillet over medium-high heat. Add the steak and cook until it has browned and the marinade has reduced, about 5-6 minutes. Spread half of the chips in an even layer of a baking sheet. Add half of the steak cheese, and tomatoes. Add a 2nd layer and repeat.

Bake for 10-15 minutes at 425°F or until the cheese is melted. Top with your favorite toppings.

What Does Carne Asada Mean?

Carne asada literally means beef that has been marinated and grilled.

What is Flank Steak?

Flank steak comes from the cow's belly muscles. It’s a flavorful piece of meat, but is very lean and contains almost no fat. Because of this it can be tough, but it can be a tasty and tender if you learn how to prepare it properly.

Marinating flank steak and cooking over high heat are important. It is super important when slicing the steak that you cut against the grain. You can see step-by-step instructions at The Kitchn.

Skirt steak can be substituted for flank steak with these nachos. It has more fat than flank steak, resulting in richer-flavored meat that’s also ideal for grilling, tacos, fajitas, and stir-fries.

Like flank steak, it must be sliced against the grain in order to be tender.

Do I Have to Let the Steak Marinate?

No. You can toss in everything and use immediately. I personally like to have it marinate for about a hour as it helps tenderize the meat.

Can I Make in a Skillet?

Yes. This recipe works just as well in a large cast iron skillet. Just make the layers like the recipe calls for.

Can I Make in a Microwave?

1. Use a dinner size plate.
2. Spread one layer of chips.
3. Top with steak, cheese and toppings.
4. Microwave on high for 30 seconds to 1 minute, or until the cheese becomes bubbly.

If you’ve tried this carne asada nachos recipe or any other recipe on Chisel & Fork, please let me know how it turned out in the comments below! You can also follow me on Facebook, Instagram, Pinterest and YouTube to see more tasty meals and anything else I'm up to. 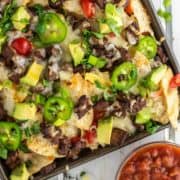