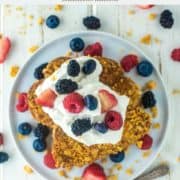 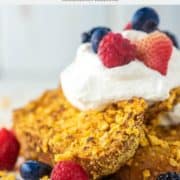 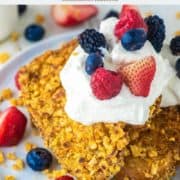 Coated in the popular crunch and sweet cereal, this Captain Crunch French toast is a breakfast/brunch both children and adults will love.

When I wake up on Saturday I always want to make delicious breakfast/brunch - from brioche cinnamon rolls to chocolate croissants to hash brown egg muffins.

But one of my favorites is French toast. And while I love the traditional recipe which has soft, custard-like inside and crispy on the outside. But I like a really crispy outside with additional flavor.

And that's where this Captain Crunch French toast comes into play. I was actually inspired by a local restaurant here in Baltimore called Blue Moon Cafe.

Their version was actually featured on Diners, Drive-Ins and Dives back in the day. It comprises three huge pieces of Texas toast with a dollop of whipped cream and berries.

And while similar, I made a few updates including using challah bread and adding some cinnamon and nutmeg to the custard for more flavor.

As with any recipe, you can switch up the ingredients for this Captain Crunch French toast. Some variations include:

Whisk together the custard ingredients in a bowl then crush the cereal in a bag with a rolling pin. Transfer it to a shallow bowl.

Dip each slice of bread in the custard on both sides and then press in the cereal to coat evenly.

Heat butter in skillet over medium heat and add 2-3 slices of bread, cooking for 2-3 minutes per side. Make some whipped cream and top the French toast with it and some berries.

Can I Use Stale Bread?

How Do I Prevent Soggy French Toast?

Part of the reason for slicing the bread into 1 inch thickness is to prevent it from being soggy. If you slice the bread too thin, it soaks up too much of the custard and just becomes a soggy mess.

The other way to prevent it from becoming soggy is to fully cook the bread. It should be golden brown and slightly crispy on the outside.

What Dairy Product is Best?

This is a rich dish so I like heavy cream here, but you can also use whole milk, skim milk or half-and-half.

If you want it dairy-free, almond milk, coconut milk or oat milk works.

How Long Do Leftovers Last?

Leftover French toast will last 1-2 days if kept in an airtight container in the fridge.

Yes. Individually wrap each slice of bread and place in an airtight container or bag in the freezer for up to 3 months.

I find it best to reheat French toast in the oven at 350°F for 10 minutes or until warmed through. You can also microwave in a pinch.

The traditional way to serve this French toast is to top with some whipped cream and berries, but other options include:

If you’ve tried this Captain Crunch French toast recipe or any other recipe on Chisel & Fork, please let me know how it turned out in the comments below! You can also follow me on Facebook, Instagram, Pinterest and YouTube to see more tasty meals and anything else I'm up to. 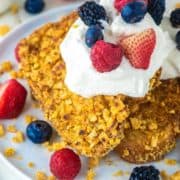