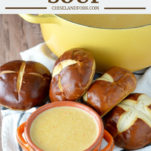 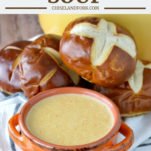 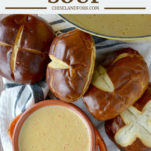 This simple beer cheese soup recipe consists of some vegetables, good sharp cheddar cheese and most importantly - your favorite beer. You can really change the flavor by what beer you choose, which for me is usually a pale ale.

Up until five years ago I had never had beer and cheese soup. It was one of those things I would see on Diners, Drive-Ins & Dives and my mouth would be salivating. Partly because Florida is pretty warm as most know, soup just isn't a super popular dish.

But then I moved to Portland. The first night I was there I went to Deschutes Brewery and saw they had beer cheese soup! It was an instant decision to order and I've been in love with it ever since. I learned pretty quickly that almost every micro brewery in Portland had their own offering of beer and cheese soup. So needless to say I tried quite a few varieties.

I mean it has cheese and beer, how could it not be good! I was in soup bliss until I moved to Maryland where it just isn't as popular. So I set out to make my own version to pair with some homemade pretzel bites and I created this easy beer cheese soup recipe that is pretty fantastic.

Like anything that relies on wine or beer for flavor, the type of beer you use will affect the taste. I usually use a pale ale but give your favorite beer a try and soon realize this is the best beer cheese soup recipe out there.

The two ingredients that can alter the flavor of your soup are cheese and beer. So mix and match to your liking.

Just wait for it to come to room temperature before covering in an air-tight container and placing in the freezer. You can keep in the freezer for up to 6 months before using.

If you’ve tried this beer cheese soup recipe or any other recipe on Chisel & Fork, please let me know how it turned out in the comments below! You can also follow me on Facebook, Instagram, Pinterest and YouTube to see more tasty meals and anything else I'm up to. 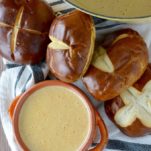