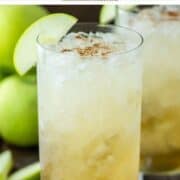 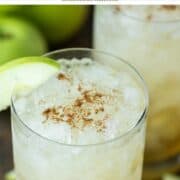 With whiskey, maple syrup, lemon juice and hard apple cider, this apple fizz cocktail is simple to prepare and tastes like fall.

With fall in full force I'm all about drinks that just taste like the season - from an apple mojito to a pumpkin martini to a cranberry Moscow Mule.

And this apple fizz is just the latest addition. If you're a fan of hard apple cider, this cocktail just kicks it up a notch.

There are a ton of options when it comes to whiskey and all will add slightly different flavors. Some options include:

Please note full ingredient list and instructions for this cocktail can be found in recipe card below.

Add the whiskey, lemon juice and maple syrup to a cocktail shaker and shake for 30 seconds. Strain into a glass filled with ice. Top with the hard apple cider and garnish if desired.

What is a Fizz Cocktail?

A fizz cocktail is an older family of sours that has acidic juice and carbonated water. It also has egg whites more often than not.

This apple cocktail uses lemon for the acid and the hard cider for the carbonation. I decided to skip the egg white. A gin fizz is the most well-known.

Is this Cocktail Strong?

A "standard drink" is the amount of alcohol in a 12-ounce beer, 5 ounces of wine or 1.5 ounces of distilled spirits. So it just depends on how much you can handle.

What is the Best Hard Apple Cider to Use?

This is all based all your preference. Just like wine, some are on the dry side while some are sweeter.

Because you add the hard apple cider at the end, it isn't the best make-ahead drink. However if you want to, just mix together everything except for the hard cider and add when ready.

The equipment you use is important to how the cocktail turns out. What is needed is the following:

If you’ve tried this apple fizz or any other recipe on Chisel & Fork, please let me know how it turned out in the comments below! You can also follow me on Facebook, Instagram, Pinterest and YouTube to see more tasty meals and anything else I'm up to. 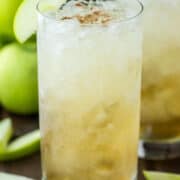